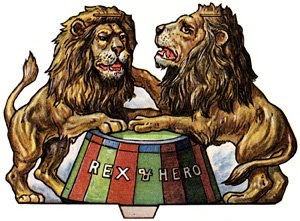 I own a cat.  His name is Hector Ayala.  He is a very inquisitive cat who is also tremendously fearful of loud noises, slippers, and large people.  I also live with a large deafening man.  Hector tends to spring into the air whenever there is something loud or big coming at him.  The large man thoroughly enjoys these kinds of reactions.

One day Hector Ayala, named for The White Tiger from Spiderman comics, was wandering the living room.  He was minding his own business smelling my guitar.  He loves to smell things.  I tend to believe that he has a nose fetish.  So, he was sniffing around, when all of a sudden, the cable went out.  There was a thunderous noise of static coming from the television.  I heard a thud from under the end table.  I muted the gargantuan boob tube and peered around the sofa.  Hector was twitching his head around looking for the source of the mysterious commotion.

I held back a laugh while watching him walk over to the now muted television.  I waited and watched, which is a great way to discover something wonderful.  As soon as he put his front legs on the TV stand I took the television off of mute.  He leaped into the air and did somewhat of a back flip.  I thought to myself, "Hector would have a lucrative career in the circus."  The thought of becoming a stage mom brought me back to reality.  I decided not to try making millions with an acrobatic cat.

Hector had worked up the courage to start smelling the TV again.  Stupid cat.  I took it off of mute again and he skyrocketed once more.  This time there was a great roar of laughter coming from my direction.  He gave me a look of pure loathing.  I could tell he was thinking, "You imbecilic human, if ever I develop thumbs, it shall be the end of you."  He is much more eloquent than I.

I decided to not push my luck anymore with the wondrous sound of static from the television… after the sixth time.

Posted by Lindsey Pedersen at 7:52 PM