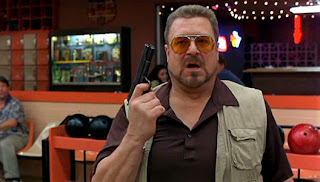 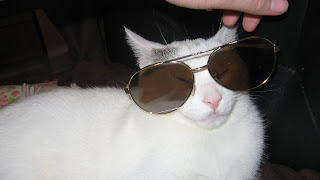 Does anyone else see the insane resemblance?  I think they were twins separated at birth.  I was in the bedroom the other day while Brandon, Brett, and Britt were out in the living room.  They kept hearing me going JEEZE!!!! or AWE CRAP!!!!!!!!!!!  Surprisingly, no questions came with those outbursts until I finally yelled YES!!!!!!!  I was trying to get this picture of Hector as The Big Lebowski.  It was really frustrating because he kept moving and getting really angry.  He was making these high pitched growls and in the back of my mind I was thinking, "Is he supposed to make that noise?"  It took about five minutes, which may not seem long but for a picture with a crazy cat it is.  I think it was totally worth it though because now John Goodman can finally have proof that he is one with a cat... Won't he be so pleased?
Posted by Lindsey Pedersen at 7:50 PM