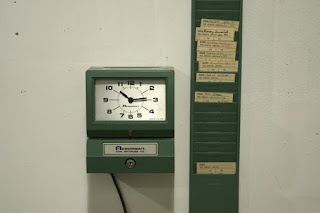 Often times I have to question why?  The other day, the question was , "Why are the "I" and the "O" keys right next to each other on the keyboard.
Often, I will be punching in or out and will clumsily type the wrong letter.  This I blame on the ages of drunken Irish ancestors... I believe that their boos infused clumsiness somehow attached itself onto me.
Anyways, when this happens I have to go to a supervisor to make my punches accurate.  This is just one of the many perks to RC Willey still making use of the dos system.  Yes, the dos system!  Once in a while I make these mistakes and it always seems to be when there is only one supervisor on duty so I have to wait for them to be finished with whatever task someone is having them help with.  Our office is broken up into three departments... Cashiers (the easiest job ever), Credit, and Customer Service.  A few weeks ago the office supervisor of the night was over in the credit department helping someone explain something completely obvious to a customer when I had mistakenly punched in instead of punching out.
I walked over and was waiting for him to finish.  He was explaining that she was an authorized user on her husband's account and that she was not equally responsible for the account so she could not know any specific information about the account... just make purchases on it.  After he explained this, she then said, "Well that is the most sexist thing I have ever heard", in a rather loud and condescending tone.  I held back a laugh while I was listening to Jon, the supervisor of the evening, explain that it was in fact not sexist but it was just the way her husband and she had filled out the credit application.  As they would have had to mark authorized user when adding her to the account. She then says, "Well this is the most backwards place in the world. I cannot believe that a business, in this day and age, can operate on such a sexist system."  She then turned around and walked away to pay her bill at the cashiers.
I realized after I had my punches fixed, that if the "I" and the "O" keys where not next to each other that I would not have been witness to that incredible display of feminist protest.  I have now received a great appreciation for the dos system and all of it's dysfunction!
Posted by Lindsey Pedersen at 1:13 PM

You have such wonderful adventures at RC Willey!
You must feel so blessed.