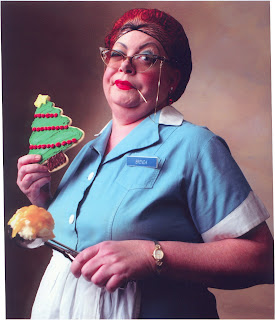 When I was 16-years-old I worked at Arby's fast food restaurant. I worked at the counter sometimes but mostly in the drive-thru since I was the fastest they had there. I hated working there. I disliked the people I worked with, I reviled taking orders for food that would most-likely kill the person ordering it, and I detested the smell of the place. Even to this day when I see the sign for Arby's I can smell the roast beef.

I never really felt like I fit in there. There was no one my age or with similar interests as me. When I arrived to work everyday, I had to take my things to the back of the restaurant. To do so, I had to pass the kitchen where a man named Alfredo worked. He was a 50-year-old Spanish-speaking man who was, let's say extremely affectionate. Every-time I came back there he would stop me and not let me through until I hugged him and said, "Hola, como estas." It was truly creepy. This kind of social environment and the nature of the work was why I had such deep loathing for that job.

One day I was working at the front counter and drive-thru alone. It was extremely slow that day. I remember only seeing our usual costumers there. There was a lady who always came in around noon to get a Diet Coke, no ice, as well as a small curly fry. She would sit there, eat her curly fry, and finish her Diet Coke. There was also a man who came in every day to get the Big Beef n' Cheddar combo meal.

It was the definition of slow so naturally the cooks were blaring their Spanish music. Alfredo, my special touchy-feely friend, was serenading me from the food window. I suddenly heard the door chime. I looked over and saw the largest man I have ever seen. He came up to the counter, wheezing from the trip into the store. He was inquiring about a coupon, "Are you still honoring this coupon?" His massive sweaty hand dropped a crinkled coupon on the counter. I picked it up as his droopy eyes stared down at me. It was damp so I tried to make as little contact with it as possible.

The expiration date, clearly listed on the front, showed that it was still good. I said, "Yes, sir we are still honoring it." The coupon gave the consumer a deal of five roast beef sandwiches for $5.95.

The corpulent man, now sweating profusely, had an expression of glee on his face. He said, "I'll take it… uh they freeze good." His eyes seemed to suddenly shift about at the prompting of this statement.

I paused for a moment, stared at him, and said, "Yes… I'm sure they do, if you freeze them." The man gave me a look of undeserved superiority, as if it weren't a lie, then paid for his order. I placed his order. In a few awkward moments he took his to-go order to the dining room and proceeded to eat every last disgusting roast beef sandwich. By the time he finished his third sandwich, I couldn't bear watching any more of this hideous display of gluttony.

I was alone at my post and really had no one to talk to so I turned to organize some things. The condiments were contained in a grey plastic box on the counter behind the registers. I took them all out and started to stack them by flavor. I was in a trance and forgot about my surroundings. I was nearly half way through my task when I heard something. It sounded oddly familiar but I could not place it. What was that sound… is something leaking, is someone whistling. The smell of musty sweat filled the air. Then I realized. The sound was wheezing!

The incredible roast beef disposal unit was back. I whirled around. There on the counter was another soggy, crinkled coupon and standing in front of me at the counter was the largest man I've ever seen.
Posted by Lindsey Pedersen at 10:38 AM 1 comment: