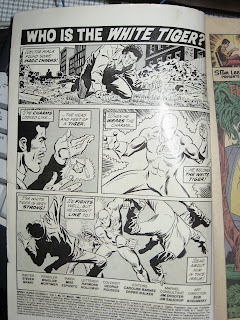 A few years back, I was living in a small apartment in Provo Utah with my husband, Brandon, and my white cat named Hector Ayala.  Brandon was napping in the bedroom and I had just gotten home from PetSmart with some kitty treats and other essentials.  While I was there I saw a nice blue collar.  It had a cute little bell on it and the color looked like the ocean on a tropical beach somewhere.  Hector had never worn a collar.  He never needed to since he was an indoor cat but I decided that it was time for him to wear one.  I pulled the tags off the collar and undid the buckle on it. I laid it out on my coffee table so I could be ready for him.

I called Hector over with the promise of treats and he came willingly.  He must have been thinking the red beast is sharing her bounteous hoardings.  I pulled him up onto my lap and gave him some scratches then I grabbed the collar.  It was like he could sense danger. He began to tense up and squirm.  I held him a bit tighter and said soothingly, “Awe, it’s okay Hector Spector,” which is one of his nicknames.  He looked up at me with his wide knowing eyes and I could tell they were filled with fear.  While he was looking at me, I put the collar around his neck.  He immediately began biting my hand.  I tried to continue to put it on him while he was gnawing at my flesh but it became too painful.  I said, “HECTOR! STOP!” and he did.

I began to thread the collar through the buckle when he began to squirm more.  The thing you have to remember about Hector Ayala is that he may be white and fuzzy but he is strong and cunning as well.  He began kicking his back legs against my forearm like a bunny would to hop around.  My grip tightened.  I finished latching the collar onto her his neck.  I decided not to give it a whole lot of wiggle room so he wouldn’t be able to just slip out of it and I sent him on his way.

He jumped off my lap and gave me a dirty look.  He scuttled off and hid somewhere.

A few minutes later I head grunting and heavy breathing.  I looked underneath the side table in our living room and sure enough there he was.  There were clumps of hair everywhere and Hector was a heaving mound of white anger.  I went to put my hand on his back to comfort him when his body levitated off the ground, flipped around, landed facing me, and then he squealed at me.  I drew my hand back and shrieked.  He was in no mood to be comforted.  As I drew closer to see what the problem was I realized that he had somehow slipped his back paw into the collar and was stuck that way.  He was breathing heavily and grunting from the struggle to get loose.  I panicked.

I went to grab him and he became nothing more than a flailing blur of claws and flying white fur.  I grabbed the closest blanket I could find to wrap around him to keep him from shredding my delicate pale skin.  I threw it over him but it was like the blanket was a fluffy white cloud and it dissipated as soon as it touched him.

I called for my husband who was sound asleep in the bedroom and could not hear my panicked pleas.  I decided I was on my own to save my cat from suffocating to death by his own stupid foot.  I picked up his writhing body and pushed through the pain of claws on flesh.  He used his one free back paw to slice open my forearm.  I screamed out in pain and then held him closer.

I knew from that point it was eat or be eaten so I grabbed a toss pillow with one hand while holding the trembling hissing animal with the other.  I pushed the pillow onto his claws and held him down tight with one hand while I pulled his back paw free.  Now that all four paws were free, he was a lot stronger and extremely angry.  He began kicking as hard as he could with his powerful back legs and tearing open the soft pale Irish skin on me legs.  I pushed pillow into him harder with my elbows and forearms.  Luckily, due to my shoddy housekeeping skills there were multiple things on my coffee table including scissors.  I somehow managed to grab the scissors and cut the cursed collar off my cat.

Once the collar was off, I lifted the pillow and there was nothing but a white blur running off to hide somewhere.  I cried out a pitiful sound that I am not entirely sure was English.  I looked at the remains of what used to be my arms and my legs and thought I would never, ever put a collar on the great white tiger known as Hector Ayala again.

Posted by Lindsey Pedersen at 9:03 PM No comments:

A Day in the Life of Hector Ayala 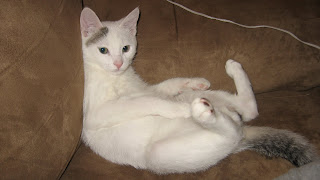 A beam of light shone through the eyelid of a cat named Hector Ayala. It created a creamcicle orange color. Hector opened his eyes and saw nothing but a blinding light. He blinked and looked away. Realizing where he was, he looked around at the familiar scene. Hector had fallen asleep on the back of the loveseat in the living room. He took in the sight of articles of clothing on the floor, as well as a bunch of empty drink cups. Is it really so hard to put things away. Those lazy humans!

Directly to his left there was a window, which was covered by blinds. There where small specs of light shining through the holes where the strings, which held the blinds together, came through. Hector noticed the small beams of light on the loveseat and jumped onto the seat. What is that? Where does it come from? Every morning, it comes and rests there on the couch but where does it come from. He tapped it with his paw. It did not move. Curious. Hector spent a few minutes poking at it until he was no longer interested in the little beams of light. Hector decided to wander around. It would be a few hours before The Big One and The Red One would wake up.

Trotting down the hall, Hector noticed that there was one of the stretchy black things that The Red One puts in her hair to hold it back. YES! I love these things! Hector swatted at it. It flew across the floor. He chased after it and skidded to a stop right in front of it. He moved it around with his paw for a moment. Then he grabbed it with his claw and pulled it up, lowered himself onto his back, and grabbed it with his back paw as well. He stretched it between his front and back paw for a few moments. I like this workout because it makes my leg muscles strong and I get to lie down while doing it. The stretchy black thing flew across the hall next to his water dish. Hector bolted towards it and slid into the bowl of water, causing the it to splash on the floor and onto his paws.

Ewe, I hate when this happens. My paws are all wet, Hector thought as he shook his paws and made a sour expression. He decided that now was as good of time as any and lapped up some water. He was very thirsty. He drank for a while. After drinking he needed to relieve himself. The litter box was full and Hector sniffed around for a good spot to pee. That’s been taken, that’s been taken… I guess this spot will do. After he was done, he tried to bury it but… since the box was full, this was not easy. Stupid Red One, she is supposed to clean this out.

Hector walked out of the bathroom thinking all sorts of profanities about The Red One and decided he was going to go look at the light spots on the couch again. He jumped up and stared at them for a while. This held his attention for much longer this time.

In a few hours time Hector had repeated these actions several times and he decided he was bored so he walked down the hall one more time and came to The Big One and The Red One’s bedroom. He could hear them both snoring. He let out a pitiful little meow. It was much more quiet than he had intended. This time he wailed. The Red One stirred. It’s working. She’s waking. He meowed a few more times. After a while of meowing and attacking The Red One’s feet, she got up and they played some games. Hector decided after he chased the feather wand around for an exceedingly long time, that he was tired enough to go to sleep. He jumped up onto the office chair and curled up into a ball. He thought about his day and all the things he had accomplished. Cat days may seem short and uneventful to human spectators but to a cat these seemingly trivial activities are just part of an important to do list. Hector thought about his day as he drifted off to sleep. My muscles are going to be so big. I only hope The Red One doesn’t find my black stretchy thing and take it away again… Hector fell asleep and dreamt of a room filled with light spots and black stretchy things.

Posted by Lindsey Pedersen at 7:24 PM No comments: