The Games of Potatoes 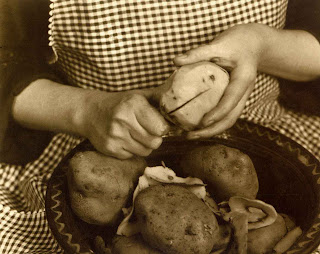 My mom died when I was 13 years old, which is probably why I have such a sunny outlook on life.  When people complain about things that don't really seem to matter, I tend to think, "What the crap does this have to do with anything?"

I lived with my grandmother for a short time during my adolescence.  My help would often be requested for things such as vacuuming, taking out the garbage, and cooking.  On one such occasion my grandmother asked me to wash, peel, and cut the potatoes for dinner.

Smallville was on and I found the lead actor, Tom Welling, to be quite dreamy.  With much grumbling I made my way to the kitchen.  This was a very hard thing for me.  After all, Tom Welling is really beautiful.

I got to the sink and with a great fiery ball of fury building in the pit of my stomach I silently washed the potatoes.  As I was doing this, my grandmother was getting out a pot.  She came to the sink and said, "You don’t need to stand right in the middle of the there.  Other people need to use the sink as well."

I finished and began to the peel the potatoes.  She came back to the check on the progress of the boiling water.  She glanced over… there was suddenly an arctic chill in the air.  "You shouldn't push so hard when you peel.  You're wasting too much potato."

Fiery darts suddenly shot forth from my eye and her head burst into flames. The sound of Smallville in the background brought me back to reality.  My mood was no longer victorious but there was defeat in its place.  I could feel the fireball growing.

I quickly finished peeling started to chop the spuds.  First, I cut them in half around the middle and then in quarters, then eights.

I heard the sound of slippers on linoleum.  It was grandma again.  I clenched my teeth.  I was hoping she would keep the criticism to herself.  I was stupid then.

"You're cutting them wrong.  You should cut them lengthwise first!"  She grabbed the knife from me and said, "Oh, I'll just do it myself."

I just smiled sweetly to myself as I sat back down to watch the rest of Smallville.  There are always winners in the games of potatoes.

I love and miss my grandmother.  I feel unbelievably lucky to have had such a weird/wonderful time with her.  She gave me so much to be grateful for including a lot of really funny stories!

Posted by Lindsey Pedersen at 9:10 AM

Wife, I will end you as I have my first twelve brides.

You are truly a fantastic storyteller. I hope you're archiving these in a notebook somewhere, because they're great, and I'm sure your future little Lindseys and Brandons will love reading them. Or they will be scared. But you should do it anyway.

I laughed out loud, as I could picture this scene taking place. You really capture your relationship well. I do miss Big A as well.